First of all, if you are currently reading this, thank you! A many great thanks to readers who have stuck with me this year, and commented on, or read my reading experience. I really appreciate your bookish company and academic contributions. Also, thank you if you’ve recommended books, audiobooks, podcasts, or stories to me, because you contributed to my reading experience, and honestly, that is the greatest gift.

This year was a very strange year for me, mainly because it’s been a “transition” year. In March I officially started this review/reading journal blog which for the first time held me accountable for my personal reading reflections. I also started to get ARCs for reviews which was exciting at first, but became overwhelming very fast. The truth about early editions for review, is that, as exciting as it is to receive a present in exchange for an honest review, it doesn’t necessarily guarantee that it’s a good book. As an early reviewer I have no idea what the book will be like, and because I have promised to give a review, I can’t in all honesty review something unless I’ve fully read it. I chose not to post about any book I didn’t like, which is why you are unlikely to find my negative rants anywhere here (except for monthly wrap-ups). Nonetheless, it means I’ve given hours and hours of my time to books that I didn’t necessarily enjoy all that much. While I was compiling this end of year list, I realized that only one book I got for early review actually made it on the fiction list, which was Ex Libris.

In May I finished University (6 years and 2 degrees later) which led to four months of being on pins and needles trying to get a job in a library. After getting a job in September I then had to move houses three times which was really quite unnerving. Lugging books back and forth, trying to keep my reading going, and at the same time being released from “reading for school” in April to “reading for myself” was very confusing after six years. Sometimes I feel like maybe I enjoyed getting ARCs because they were like school assignments again and that has become my comfort zone. That said, my eye for which books I request as ARCs has also become better. I can see already that books I’m currently reading (to be released in 2018) are far more interesting and right up my alley regarding reading preference. I’m really enjoying Simon Garfield’s Timekeepers: How the World became Obsessed with Time, and Christian Davenport’s The Space Barons: Elon Musk, Jeff Bezos and the Quest to Colonize the Cosmos. Although I have not yet reviewed them, I can tell that they will become favourites. I have a long list of fiction as well, which I think I will enjoy much more than what I previously requested.

On my top lists I will count the books which I’ve personally read in 2017 (which were not necessarily published in 2017). I will also not count re-reads, which I obviously enjoyed before if I’ve returned to them. I did however start reading some books that I enjoyed so much but for some reason they coincided with a stressful time and I couldn’t accord them the attention they deserved, so I’ve temporarily put them aside (even though I predict 4-5 star ratings).

If the title of any of the books below is “clickable” it means I wrote an in-depth review/reflection on it (if you want to read it). 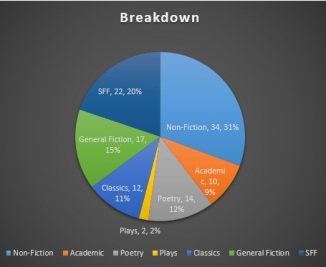 Books I re-read this year were (No Particular Order):

Bonus: (book I’m currently reading and not really counting in the statistics above, but am REALLY enjoying)

Vampyres: Genesis and Resurrection: From Count Dracula to Vampirella by Christopher Frayling. This work is half non-fiction history of Vampires in literature and mainstream culture, and half anthology of fictional works containing vampires. It is very well put together, and I am enjoying all the non-fiction bits just as much as the fiction.

Top 10 Fiction (In Order of How much I enjoyed them)

Things I learned about Myself:

In the meantime I may still squeeze in a few posts until the year is out, including of course my NEW YEAR RESOLUTIONS in terms of what I hope to achieve with my reading goals next year. I hope you all have a wonderful time in these last two weeks before the New Year! Happy Holidays, and thanks again for reading 🙂