“The Order is about making death a part of your life. That means committing to staring down your death fears- whether it be your own death, the death of those you love, the pain of dying, the afterlife (or lack thereof), grief, corpses, bodily decomposition, or all of the above. Accepting that death itself is natural, but the death anxiety and terror of modern culture are not.” – The Order of the Good Death

“The Funeral of Shelley” by Louis Édouard Fournier

Caitlin Doughty is one of the most wonderful women I stumbled upon on YouTube, and I am so glad I did. Since I was five years old, I’ve had many encounters with death. Born and raised in Romania, open casket funerals and three-day wakes in the home are followed by so many practices that I can say I was very much involved with the handling of many human corpses from death to burial. Washing the corpse, preparing food and serving it to more than half the town, kissing the corpse’s forehead, guarding it night and day for three days, and covering all the mirrors in the house in a black shroud for the whole time the corpse is in the house were all perfectly normal requests in rural Romania. Most importantly, death was (and is) very much a part of daily conversation. In the West however, bodies are hidden and even worse: death is hardly discussed. I constantly feel like a morbid weirdo (in Canada) talking about something that had been a huge part of my childhood and the many ways in which it confronted me to question my life, and prepare for my inevitable death. When I encountered Caitlin Doughty on YouTube it was like meeting a long-lost friend.

Doughty was born and raised in Hawaii and after witnessing a death at the age of eight she became fascinated with the topic. She studied the medieval period at University, and after attending mortuary school, apprenticed at a crematory in Los Angeles. Becoming more and more familiar with the practices of embalming, cremation, and funeral practices in America, Doughty began to notice some red flags regarding the funeral industry. Funeral home directors taking advantage of mourning family members by pushing upon them caskets worth thousands of dollars (all to make money of course, and so the people cutting the grass don’t have to go over uneven ground), pushing embalming practices, as well as presenting these topics in a light that make the remaining family members believe it is legally enforced. Imbuing bodies with toxic chemicals, and incorporating them in non-biodegradable caskets have damaging consequences for the environment. In addition, taking bodies away and hiding them from the moment of death hardly allows the family to process the death of a loved one. Lastly, people disengaged from discussion about and around death live in a constant dread. Thinking of human remains boxed in a rigid casket six feet under as a possibility (at least for me) is really quite frightening.

When I heard that one could be buried in a pod in fetal position organically decomposing beneath a tree–it was the first time I got excited about my death (weird to say out loud). Just the thought that with my body I could nourish the Earth, and live in a different form in a ‘Sacred Forest’ makes me happy. But not just me, ‘many’ according to Caitlin want to become trees and have an organic death in different forms. She gave two TED Talks focusing on The Corpses that Changed My Life (which in text format–with far more details–became Smoke Gets in Your Eyes and Other Lessons from the Crematory) and most recently: A Burial Practice that Nourishes the Planet which is a summary of what she now encourages: a natural burial. Caitlin herself repeats that what she is suggesting is not ‘her idea,’ ‘new,’ or ‘an invention’ because it’s a practice that has been done in different forms all over the world, and in history. She now works on advocating for an environmentally friendly burial, a burial practice that respects the wishes of the dead person, and most importantly on educating the public about their options, their rights, and the opportunities available. Doughty became the founder of The Order of the Good Death.  If you click on the title you can find more about it from the website itself, run by a large team advocating for educating the public on ‘the good death.’ There are links there that can lead you to other books written on topics like ‘death,’ or ‘ghosts’ which are academic in nature. Caitlin’s YouTube channel “Ask a Mortician” is absolute gold! In videos ranging from 4-10 minutes Doughty tackles topics like “What happened to the dead bodies on Everest?” “How is Vladimir Lenin’s Body Preserved?” or “What’s the deal with La Pascualita?” — seriously I binge-watched 5 years of YouTube in a week.

One of my favourite lines in her book is this:

“In many ways, women are death’s natural companions. Every time a woman gives birth, she is creating not only a life, but a death. Samuel Beckett wrote that women “give birth astride of a grave.” Mother Nature is indeed a real mother, creating and destroying in a constant loop.” 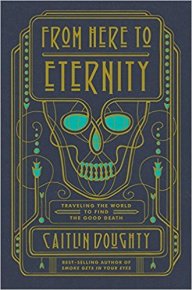 The support from viewers of her work for The Order of the Good Death on Patreon, and encouragement from a large number of people reading her first book, motivated Doughty to travel to several countries, and some American States to learn about their burial practices–Indonesia, Bolivia, and California among them. On October 3rd of 2017 her book From Here to Eternity was published by W. W. Norton & Company. In this book, Doughty dedicates a chapter to a different location and examines how the role of death fits into the larger conversation, how burial practices are carried through, and how/what we can learn from them.

The book is accompanied by wonderful illustrations executed to perfection by Landis Blair. His artwork is dark and highly atmospheric. Blair himself is a member of The Order of the Good Death.

If you are fortunate enough to live in the United States, Doughty will be going on a book tour very soon, and the dates have been listed HERE. If you are near one of them I highly encourage you to go. I must emphasize that no one asked me to review this book or promote Doughty, this is what I would genuinely recommend, and what I genuinely enjoy/believe in. I am grateful that people like Doughty exist. I highly recommend her books, her YouTube channel, and her message.

I will close off as Doughty always does on her channel:

“and remember: you WILL die.”