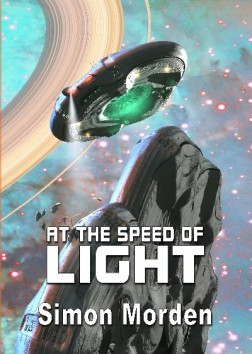 3.5 I’ve received an Early Reviewers copy of Simon Morden’s 2017 novella At the Speed of Light from LibraryThing. This is a NewCon Press novella that is about 115 pages and can be read in one sitting. The main character, Corbyn, is slipping through two levels of consciousness as he fully awakens realizing that he had fallen asleep at the wheel of his spaceship with the foot on the accelerator traveling for years at the speed of light. His state brings him on the outskirts of space, outside of the bounds of human knowledge or the universe and along he finds different kinds of consciousness/characters. I was hooked in the beginning stages pre-awakening as Morden explored certain anxieties of the human condition. The discussion of anxiety dreams, derealisation, and questioning reality altogether is a topic that highly fascinates me. The novella however takes a very ‘hard sci-fi’ turn halfway through which threw me off especially in terminology. I’ll give you examples: “cross-referenced hibernation,’ ‘pre-defined range of stimuli,’ ‘semi-crystalline matrix,’ and ‘astrogation data.’ Maybe I’m a little bit too early on in my science-fiction reading journey to judge this novella too harshly, but I would have really liked to understand what those things meant. The novella would have done much better (for me) if it had more reflections, tapped into what made humans human that is different/unique, and it could have worked wonderfully through Corbyn’s character having been more 3-Dimentional. I realized halfway through that I didn’t care that much about the protagonist because nothing humanizing about him was shared.

“not as close as his superstructure, not as far as infinity” or “are dreams that you don’t remember less real?”

Good question. It reminded me of Neil Gaiman’s “…tales and dreams are the shadow-truths that will endure.” The first 30 pages and the last two pages tap into Corbyn’s philosophical side, particularly on what it is that makes the human consciousness and I think I preferred that to the engineering manual that was everything in between. I will re-read this in the future after I read more sci-fi and see if I feel the same way. I would recommend this to people who know they like sci-fi and technology, with a machine/mechanical orientation and not character-driven. I am also fascinated by Simon Morden; his background in Geophysics contributed greatly to his work and I look forward to reading his longer works particularly his Metrozone series that is set in post-apocalyptic London, for which he recently received the Philip K. Dick Award (2011).

The cover on this novella is fantastic. There are four NewCon Press novellas released and the artist worked on all of them. The name however was not released online.