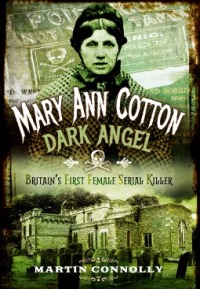 I recently got immersed in the world of Mary Ann Cotton, branded as “Britain’s first female serial killer.” Although Cotton being “the first” is disputed as there might have been many others before her, she is fascinating nonetheless. Martin Connolly wrote a short booklet on the town he lived in, titled The Potted History of West Auckland. After reading his work, many requested that he write a book about Mary Ann Cotton. Who was she? What do we know about her? Connolly decided to go to all of the possible sources to find out as much information as he can on Mary Ann Cotton. Connolly writes in the introduction:

“When I had brought together all my material and thoughts, I then turned to see what books on Mary Ann Cotton were being recommended. In this, two stood out, Mary Annn Cotton –Her Story and Trial by Arthur Appleton and Mary Ann cotton Dead, But not Forgotten by Tony Whitehead. Arthur’s account has some factual and date errors, but was a good read. It was on reading tony Whitehead’s book that I had a moment of wishing I had started with that particular book. In it, he had amassed a large number of images of birth, death and baptismal records. It would have saved me a great deal of time, energy and money.”

What I enjoy about Connolly’s book is that he frames the structure of Mary Ann Cotton’s life chronologically and in each sequence he tells us what we can know from the facts without interference. He doesn’t make assumptions or tell us what to believe. He collected so many pictures, certificates, and documents simply presenting them to us as images with a brief explanation of where he acquired them. After laying down the entirety of Cotton’s documented life, he presents to us her trial, documents from the trial, letters to and from Mary Ann Cotton whilst she was in jail, and accounts of the day she was hanged with all the details (including how long her body convulsed upon being hanged). After, Connolly tells us who survived Mary Ann Cotton (from people she knew and lived with), and subsequent rural stories that circulated about potential ghost sightings of Cotton. She entered English folklore for quite some time. He also gathered medical recordings of how the doctor examined the corpses to indicate that it was in fact Arsenic poisoning—which was used as ‘proof’ of her guilt. Connolly even covers a brief biography of all the men and women involved in her trial, doctor supporting evidence, and police officers involved in her arrest.

On one hand I liked being presented with facts/proof around Mary Ann Cotton’s life without biographer interference or flowery language. On the other hand, I found this work lacking in setting the atmosphere. Although Connolly makes a brief mention at the beginning that she came from a mining village with low wages, and death was aplenty; he didn’t quite set the atmosphere of the time. He jumps from one section of her life to the next without much more introduction. I would have appreciated a sensory experience, an induction into this Victorian life to try and understand. Connolly concludes with:

“was she guilty of murders? I struggle to answer this question. It would be anachronistic to try and look at the situation with a modern mind. In that period, many things were black and white in legal terms…to judge her then is difficult…I suppose I arrive at a place where I would bring in the Scottish legal judgment of ‘not proven.’”

That is a pretty dark note to end on (considering the woman was hanged). 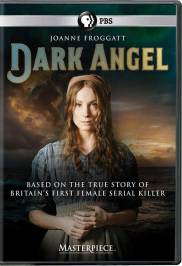 I read the book at the same time as watching the PBS three-episode miniseries called Dark Angel featuring Joanne Froggatt as Mary Ann Cotton. The show helped me with what the book was lacking which was atmosphere. The imagery, and the details in costumes and setting really put things in perspective.

What the show focused more on was Cotton’s seduction abilities. They presented her sexuality as being far more overt than any Victorian character I’ve encountered thus far, which made me think they appropriated a slightly modern take. The book tells us to assume she was at least charming because she managed to lock down four husbands but her seductive abilities weren’t notorious. Something missing from the show though, was the ambiguity and potential innocence that Connolly presented to us in the book. In the television program they pretty much show her carrying spoon-fulls of Arsenic into everyone’s tea, including her four husbands, lover, several step-children, her mother, and best friend. If you ‘judge’ her based on the show you ‘know’ she murdered everyone, whereas if you look at the documents and transcripts of what we actually can know….it’s pretty ambiguous, and certainly doesn’t make the case for a death penalty.

Both the book and miniseries kind of gloss over something kind of important. Mary Ann Cotton gave birth to 13 children, 11 of which died. I recently read The Light Between Oceans showing how much damage can be done to a woman’s psyche after losing a single living child, or even experience a miscarriage. To have lost eleven children she gave birth to is so much proof to me that Cotton was certainly not mentally stable. Postpartum depression alone will mess you up, let alone burying so many children of your own. The show and book gloss over it as if it was no big deal, as if it’s to be expected of the time; but even in the Victorian period the death of a child was not so simple. We have records of how much Dickens, and Darwin grieved over the loss of a single child (as fathers). Skipping over this concept to me, is kind of missing the point. I think when people read books on “serial killers” they are intrigued by character and the how they got to be that way. Skipping over the grieving process, and the bodily damage from each pregnancy and subsequent burial of tiny bodies completely hides from the readers and audience what messed this woman up so much (IF she was guilty at all). The presentation of economic circumstances of women at the time and their dependency on men really placed a contemporary feminist angle of how difficult it must have been to lack autonomy and how desperate things can really get.

So if you embark on this grim adventure I recommend reading something about the Victorian period first, and perhaps read the book alongside watching the miniseries so you have a full picture of Mary Ann Cotton. I really did enjoy this narrative altogether. The book is published by Pen and Sword, and the miniseries by PBS.

Ah, now I get that line from Chicago