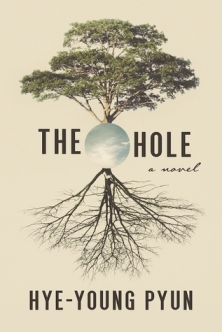 The Hole by Hye-Young Pyun is the third book I read for my Shirley Jackson Awards 2017 challenge (See more here). Pyun is from Korea and this novel has been translated into English by Sora Kim-Russell. The novel has been marketed as a psychological thriller about loneliness. Even before being translated or nominated for this prize Hye-Young Pyun has been compared Shirley Jackson and Yoko Ogawa “for her blending of the everyday with the gothic and the grotesque.”

The novel is short but very intense. As I mentioned earlier, it is the shortest novel on the list of nominees this year. The novel follows Oghi, a university professor who has recently been in a car accident with his wife. His wife passes away on impact during the crash, and he survives it, but is fully paralyzed and must have a caretaker. His caretaker is his “next of kin” which is surprisingly enough: his mother in law. There must be some difference in cultures here because I don’t see this happening in the West. We are told the narrative from Oghi’s perspective and the lack of mobility, the grief, and the flashbacks all accumulate to a very tense and suspenseful read, as you feel just as paralyzed as Oghi. Oghi’s tense relationship with his wife and mother-in-law pre-accident makes this story extra creepy and gives the reader a sense of uneasiness, but also the present due to his incapacitated state, and visions of the ghost of his wife. His mother-in-law is as strange as the plot and situation, she is a widow, just lost her daughter, but struggles with her half-Japanese identity. At this point I felt a little disjointedness from the narrative because I felt like something was missing—there’s a gap in my knowledge of understanding certain things relating to Japanese-Korean relationships and I missed out on a lot of the mother-in-law’s characterization.

What I absolutely admired about Hye-Young Pyun’s writing was the way she weaved the theme of “the hole” through this novel. According to her publisher: “The title of the novel is a play on words: a transliteration of the English word “hole,” 홀 (hol) is a Korean prefix meaning “alone” and most readily refers to one who is widowed.” The hole here is used as both fixating on the fact that both Oghi and his mother-in-law are alone and widowed, and also on the hole within, the hole of experiencing complete loneliness and despair. One reviewer on Goodreads noted that even Oghi’s profession and his thoughts towards the Babylonian Map of the World, dated to the 5th century BC has a hole at its center. Even visually, as you progress through the novel, each chapter is prefaced by a “black hole” which gets progressively larger before it engulfs the reader completely. I took a picture because it looks really cool.

Pyun’s ability to play with so many elements, themes, and characters in such a small space while simultaneously keeping the reader on edge is really admirable. Again, I think maybe some things got lost in translation, or maybe the translation enhanced it, I don’t know. It’s a little difficult to compare as this is the only novel on the nomination list that is in translation. The original has been published in Korea in 2016 which means a lot of thought and consideration was given to place bring this novel into this competition. I thought it was a great read, and I highly recommend it for people who enjoy the works of Han Kang, Yoko Ogawa, Daphne du Maurier, and yes, even Shirley Jackson herself.