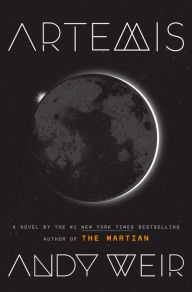 Earlier this year I read The Martian by Andy Weir. Artemis is Weir’s second novel and it will be released by Crown/Archetype on November 14 this year. Weir is both blessed and cursed with The Martian being his debut novel. On one hand we all know his name and look forward to every project, and on the other, every work will be compared to The Martian which is a high standard, considering the blockbuster success that followed.

Jasmine Bashara (Jazz) is the protagonist of Artemis. She is a young, ambitious, daring woman of Saudi Arabian descent. She lives on the moon. Set in the near future, Artemis focuses on the first village that humans will have on the moon and how humans will most likely interact with it. The geography of this village is laid out on the first pages as having five domes each named after a famous astronomer. Only the wealthy can really afford to own property on the moon with a luxurious apartment, and the rest are mere employees and household staff. The five domes are mostly underground and the entire village functions as a ‘Vegas-like’ amusement location. Jazz is one of the lower class citizens and aspires to one day afford a roomier place on the moon. Her side project is smuggling contraband on the moon for rich people like Trond, who has a big request of Jazz driving the plot. 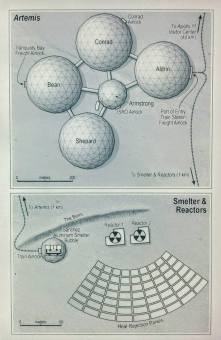 The set-up of the village on the moon

I enjoyed immensely the ways in which this moon village comes to life. There are Earth tourists getting a field guide coming and going, the whole place runs like a resort, there is smuggling and crime, and like all places the moon has its own currency known as Slugs (ğ). In this projected future the moon is reserved for the privileged and is an honor not bestowed on many. The financial situation driving Jazz to do certain things, the description of her headquarters, the occasional ‘space-related’ incidents bring Artemis to life. There are also projected inventions which amused me like the self-cleaning, reusable, self-sterilizing condom.

The book has so far received a criticism of which I am wary and I must address. The early reviews criticize Weir for not being capable of writing a female character. According to some she sounds like a 15 year old boy, or sounds exactly like Watney in The Martian with no added dimensions or changes. I felt similarly near the beginning of the novel and there are moments where she sits a certain way and a male character will say “do women know they look sexy when they sit like that” and she’d say “yeah of course that’s why we do it” and this is just one of many examples, but then I realized that I can’t pinpoint one female character in literature with this much male-like confidence. If Jazz is just what a woman with the confidence of a man looks like then you know what… I like it! She’s the female equivalent of Rothfuss’s Kvothe. She’s confident, attractive, good at what she does, and she’s not shy about it. Also, if you think about it, the moment a character is raised a lifetime on the moon surrounded by a particular kind of person, I think it’s understandable why her personality evolves this way. Why should a woman or a different background origin differentiate her talking ways, her ambitions, or her personality? I think it makes perfect sense for Jazz to be written this way given the context and her upbringing.

As for the writing, there is a secondary reason why Artemis won’t come close to The Martian, and Weir addressed it himself in an interview. He says:

“… for The Martian, I was doing it as a serial, and I posted a chapter at a time to my website, and I could get feedback from the readers right on the spot. But for Artemis, it’s more traditional. I had a publishing deal from day one. The feedback, I got from my editor, my agent, and some close friends and family members. I couldn’t post it online for a few thousand readers.”

He admits that he misses the fact-checking and feedback provided by a wider audience of readers pre-novel publication. I’ll link the entire interview here because Weir has a good sense of self-awareness when it comes to his work and he is quite humble.

Overall I enjoyed Artemis, and I look forward to sharing it with my friends come November.