Done! I challenged myself to read all five nominees for best novel in the Shirley Jackson Awards 2017 within a month and I officially finished them. Here are the links and names of the five novels I read for this challenge:

I enjoyed all these works very much and I’m glad I took on this little project for a few weeks. Looking at some numbers and stats, my instinct says the winner will be The Changeling by Victor LaValle. My personal favourite was The Night Ocean by Paul La Farge. The Bone Mother sent me on an adventure looking at really cool Romanian photographs from a hundred years ago. The Hole was the first Korean book I’ve read in translation, so that was something new for me. Ill Will tested my ability to solve a mystery and interact with text presented in a new and interesting way, and forced me to learn about Satanic cults in the United States. Each one of these books brought something very different to this challenge. Of course, I have been wrong many times before, and all I can say is that I’m very excited to see who they will select as this year’s winner. There’s nothing as pleasant as making wrong predictions on the internet! All I can say is that whoever they choose there is no wrong choice here. The 2017 Shirley Jackson Awards will be presented on Sunday, July 15, 2018, at Readercon 29, Conference on Imaginative Literature, in Quincy, Massachusetts. If you have been following this with me, or reading my reviews for this challenge thank you very much for sticking with me and for your time! 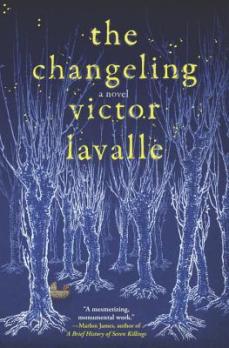 The Changeling by Victor LaValle is the fourth book I’m reading for the Shirley Jackson Awards 2017 nominees. If I had to put my money down, based on what I’ve read so far and looking at its stats, I would say that this book has the strongest chance to be the winner. That said, I have not finished all five yet (still have one left). Also, The Changeling has just won the 2018 Locus Award for Best Horror novel.

This novel has “two starts” but for good reason. The first is Apollo Kagwa’s parents’ love story and the beginnings of Apollo. Apollo is mixed and from a low-income family. His father mysteriously disappears but continues to appear to Apollo in dreams/nightmares. Apollo grows up and becomes very involved in dealing/collecting/selling rare books and is himself an avid reader. As things progress he too falls in love (the second start) with Emma and together they have a baby boy. At this point the novel takes a term from slightly creepy and mysterious to supernatural stellar writing. I liked the way the Goodreads synopsis puts it without spoilers: “Before Apollo can do anything to help, Emma commits a horrific act—beyond any parent’s comprehension—and vanishes, seemingly into thin air. Thus begins Apollo’s odyssey through a world he only thought he understood to find a wife and child who are nothing like he’d imagined.” That…is putting it mildly. This novel is a roller-coaster ride, and it somehow does it by creeping up on you. You start slowly and you’re being fed one odd thing at a time, until you find yourself so deep you forget how you got here in the first place. I had to consult the synopsis because by the end I wasn’t sure what would be considered a spoiler.

What I particularly loved about LaValle’s writing was the way he brought the dark fairy tale to the city: New York. As a passionate Lore fan and reading these kinds of stories with supernatural elements, I can’t help but notice they are almost always set in an isolated town, in a rural part of a very abandoned state, or in some very small place with few inhabitants. Dropping this dark fairy tale in New York while simultaneously poking at the very contemporary “here and now” elements of parenting, social networks, and media is something that I never considered could come together so well in one cohesive narrative. LaValle challenges the spaces one thought of as ‘safe’ due to their bright lights and overpopulation and turns this concept it on its head. Parallel to these writing techniques, unstable setting, and atmosphere LaValle still places at this novel’s core the essence of what makes us human in exploring our strengths and weaknesses when it comes to family, love, parenting, and how our origins, or ‘where we come from’ or the literal ghosts of our past can influence our present. I really enjoyed this book, and even though it took me a lot longer to read this one than the others it was worth the effort. I recommend this if you like Aaron Mahnke’s Lore and Cabinet of Curiosities, dark fairy tales, gothic atmospheres, and of course…Shirley Jackson.