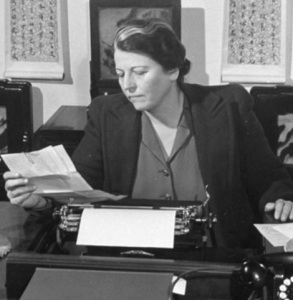 Pearl S. Buck (1892-1973) was a bestselling author of fiction and nonfiction, celebrated particularly for the ground-breaking depictions of rural life in China. He best work The Good Earth which is a trilogy, received the Pulitzer Prize in 1931, and in 1938 she received the Nobel Prize in Literature for her body of work, making her the first American woman to do so. She spent most of her life in China (Zhenjiang) because her parents were Presbyterian missionaries. She was educated in the U.S. at Randolph-Macon Women’s College, then returned to China, married John Lossing Buck and moved to Nanking.

Her novels dealt with the Chinese Cultural Revolution, the changes in the East post-WWII, and rural China. In 1934 Buck left China to be near her daughter who was mentally ill and hospitalized in New Jersey. In her later years Buck started engaging in philanthropic projects. Because there were practices rendering mixed-raced children unadoptable—in particular, orphans from the war—she founded Welcome House in 1949, the first international, interracial adoption agency in the United States. She died in 1973 from lung cancer in Vermont. The Chinese government objected to Buck’s portrayal of the country’s rural poverty, and in 1972, banned Buck from returning to China. 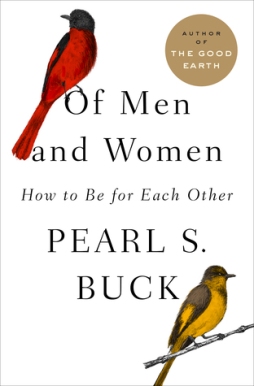 Of Men and Women is a series of essays that Pearl S. Buck wrote and published in 1941 where she examined the differences in relationships between men and women in China versus the United States. She writes:

“Very early, therefore, I perceived that women together led a life of their own”

“In China the home was not what it is in our country, a thing apart from men’s lives except when they return to it for food and sleep. The real life of the nation went on in the home.”

She explores the set-up of the Chinese household that would often include “three-four generations under connecting roofs” versus the American lifestyle where only the nuclear family would be found living under the same roof. Children would then grow up not knowing just one household leader/alpha, but have a multi-generational experience.

She then turns her attention to the different ways women were educated in the East versus the West. In China “women handed down to women a vast lore of history, custom, ritual, and practical knowledge which educated them and made them a part of the great national whole.”

Buck asks in this series of essays one essential question:

“Why do so many American women seem not happy in being women when they have the freedom to make what they will of themselves? And why do women and men not enjoy each other more in my country?”

Although Buck emphasises that despite everything she prefers the American way over any other, and thinks the progress done in the West is one to strive for, she noted that American women, while educated, free, and supported, were still viewed as a separate entity from men, and there was still a miscommunication between the two. Buck examines how relationships between men and women are different in every country, and it’s that difference that makes it a nation of its own. She writes that a traveler should examine how in every country men and women feel towards each other or “the reality of that country has escaped him.”

“For no human being was created to be solitary, and when it is cut off by doubt and distrust and lack of understanding from the other to whom instinctively it turns, whom nature has created for it, then strange stops and blocks and ills are inescapable.”

In the epilogue Buck writes that it has been thirty years since she wrote this book (in preparation for a newer edition back in 1971). She writes that the China she spoke of “is no more…how changed! Communism rules, and Communism has totally altered the relationship between Chinese men and women.”

Thus, I would urge the reader to remember, when reading this collection, that these essays were written in 1941, reprinted with an added epilogue in 1971, and then reprinted now in 2017 for this brand new edition. In the interim, China, and America have changed drastically.