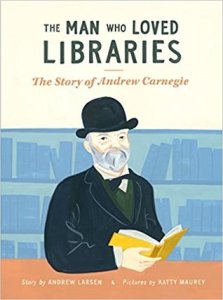 I couldn’t resist—I had to request this book for review because: LIBRARIES. As a librarian and bibliophile I think it’s vital to encourage young children to know more and more about the library world and the important figures in its history, so I am very happy this book exists. The targeted audience for this book is children grades 1-3, and I’m fairly certain it is intended for school libraries or public libraries to purchase and have in their collection—mainly because near the end of the book the author writes:

“Andrew Carnegie built public libraries so that someday someone like you could feel the joy of borrowing a book like this.”

The text is written by Andrew Larsen and it’s accompanied by Katty Maurey’s beautiful illustrations.

The main story is non-fiction and simplified for the targeted age group. The language makes this book very accessible and I found myself rooting for Andrew the whole way through.

The book covers Carnegie’s life: born in Scotland facing extreme poverty, his family’s immigration process to Pittsburgh, U.S.A, and the help he himself received from Colonel Anderson who opened his doors to his own private library so that Andrew may read. Larsen writes:

“Andrew knew that learning was the key to the future.”

After several smart investments Andrew Carnegie became quite wealthy but instead of hoarding his savings he decided to invest in things to help his community and everyone around the world:

“he believed that riches are for sharing.”

I loved this story, and I hope they stock many school libraries with it. It’s vital for children to admire philanthropists for their kind work rather than their lavish lifestyle. I also think it’s important to introduce children to a time when libraries and access to information didn’t exist. It’s so hard to imagine now a time when this was true. Also, I’m a big fan of library history being taught early on. The first time I heard of Andrew Carnegie was in the first year of my Masters.

Overall this book is awesome and I think it achieves what it sets out to do for the intended age group. It’s difficult to criticize a book for children that encourages sharing, kindness, and respect for libraries and learning. If anything my only criticism is that it could be longer. Strongly recommend to elementary school libraries.

This book is scheduled to be published by Owlkids Books on August 15.