“Their writing explores themes in our society…the plight of the marginalized, the environment, the difficulties of finding one’s self and place, the anxiety of getting it all wrong, the longing for love, the search for justice.” —Anne Urbancic

Professor Anne Urbancic (at Victoria College, University of Toronto) assigns her first-year students to explore in depth a library’s archive, write a detailed essay, and present it to the class. One of her students, Griffin Kelly, discovered in her search a series of compact discs in the Victoria University Archive at the E.J. Pratt Library. What she found were 16 interviews conducted by Earle Toppings with some of Canada’s top novelists and poets who were leading figures in the emergence of Canadian identity in literature. Kelly brought Mr. Earle Topping—an editor turned radio host who still resided in Toronto at the time—to speak to the class. Thus began the project that has now been turned into the book Literary Titans Revisited. Urbancic called upon four students, including Griffin Kelly herself, Geoff Baillie, Amy Kalbun, Vpasha Shaik, and the E.J. Pratt Library’s leading Reader Services librarians Agatha Barc, and Colin Deinhardt to collaborate on transcribing the interviews.

Urbancic notes in the introduction that:

“While Canada prides itself on its many excellent and exceptional authors and poets… they had not often appeared on the world’s literary stages until the second half of the twentieth century.”

The topic of Canadian identity in literature is still relatively new compared to its English and American fellows, and resources on Canlit authors are still being pieced together. What Urbancic created with Literary Titans Revisited is an excellent primary source for future Canlit students. Each writer’s interview with Earle Topping is preceded by a brief introduction including biographical material, a portrait, relevant and major contributions, as well as a brief analysis of their overall influence on Canadian literature and culture. The first section ‘Prose’ includes interviews with six novelists including Margaret Laurence, Morley Callaghan, Hugh Garner, Hugh MacLennan, Mordecai Richler, and Sinclair Ross. The second section ‘Poetry’ contains the remaining ten interviews—among which are Al Purdy, Dorothy Livesay, and Irving Layton—to name a few. Lastly, the seventeenth chapter contains an interview with Earle Toppings who discloses his interviewing process, the composition of his questions, and the experience of interviewing the sixteen authors. Finding how he came up with the project and the recording devices he used at the time is an inspiring reminder of how much one can do with minimal resources. 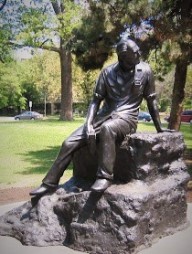 The authors shared personal anecdotes, life struggles, and their creative process. Some poets read aloud to Toppings some of their newly composed poems which are not necessarily the ones that later on appeared in print. When it comes to transcribing the poems, this collection stays true to the recordings rather than what was finalized in print. What I found particularly interesting was how at the moment Canadian writers were asked how some of their life experiences connect to their artwork, they began by discussing either a British or American author as an example of how that can happen. Morley Callaghann speaks of Conrad and Joyce, Hugh Garner of Fitzgerald, Hugh Maclennan of Hemingway, and Mordecai Richler of several authors like George Orwell, and Norman Mailer. While trying to find the Canadian voice, these Canadian authors were still using American and British identities as a crutch even in the late sixties.  These interviews are a clear depiction of the search for a unique voice. Simultaneously, some keep in perspective the problematic consequences of Canadian history. Urbancic emphasizes that Al Purdy for instance:

“points out in his poignantly metaphorical verses about broken indigenous art pieces that represent the plight of Canada’s First Nations.”

This book has been published by Dundurn Press and is currently available for purchase (click here) and at your public library (click here). I would recommend this work to anyone who is interested in Canadian Literature, wants to be in the presence of Canadian literary titans, and interested in aspects of the creative process. Lastly, I would hope that all libraries will have this book in their collection. This collaborative project supplemented with the editorial work of Anne Urbancic is a new excellent primary source in Canadian scholarship.