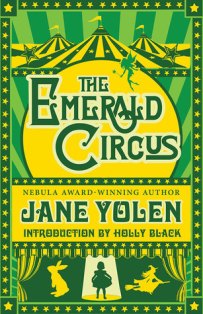 The Emerald Circus is an excellent collection of fairy tale ‘retellings’ written by Nebula Award-winning author Jane Yolen. Although I use the term “fairy tale retellings” since it is a labelled sub-genre, Yolen’s collection incorporates the retelling of more than just fairy tales. Children’s books like The Wonderful Wizard of Oz, Alice’s Adventures in Wonderland, and Peter Pan are also retold in this short story format from different perspectives, as well as Edgar Allan Poe’s “The Raven” and Emily Dickinson’s lifestyle and inspiration. The third category of retellings in this collection is of medieval legends of Camelot and Robin Hood. “The Quiet Monk” is the story of the hidden grave which supposedly had Arthur and Guinevere’s bodies in it which falls under Arthurian Retellings along with “The Confession of Brother Blaise,” and “Evian Steel.” Some of the short stories in this collection have been previously published in anthologies, or individually. For instance, “Lost Girls” the feminist retelling of Peter Pan where women riot and protest for their rights in Neverland won the Nebula Award in 1999 and has been published in Twelve Impossible Things Before Breakfast.

The Emerald Circus is a great introduction to Jane Yolen as it incorporates works from various points in her writing career. This anthology includes all the stories that haunt us past childhood and stay with us in a collective imaginary space. Arthurian Legends, Children’s Literature, and 19th Century American gothic poets share a fantastical quality that remains a point of comparison when reading contemporary literature. At the end of the collection of retellings, Yolen takes a few pages to explain how the idea for each of these stories came about. I will focus on one of her stories to give you an idea of how Yolen’s stories come through. As a big fan of Peter Pan and Neverland retellings, “Lost Girls” was the story that stayed with me most.

“I wrote ‘Lost Girls’ because I couldn’t forget the uneasy scene in which Peter Pan is weeping because he can’t re-attach his shadow. When Wendy sews it on for him, he crows and cries out ‘Oh the cleverness of me!’ As if Wendy had done nothing and he had done it all.”

Yolen’s research led her to Alison Lurie’s study of Peter Pan in a 2012 essay where she compares Peter’s existence with what we currently know of child psychology. He is easily distracted, has little understanding of the future, and lives in a world where real life and make-believe are almost the same thing. Peter might be “gay and innocent and heartless” as the last words of Peter and Wendy suggests, but according to Yolen:

“he [Peter] is also deeply self-centered and without remorse…Peter might be eternally young in his looks, but his eyes betray his real age. He has seen so much, he would have an old and narcissistic soul.”

Yolen takes this analysis and applies it to her story “Lost Girls.” In it, the main character is a young girl named Darla who has been raised by today’s Western standards of feminism and equality. As Darla reads Peter and Wendy she finds it unfair that “Wendy only did the housework in Neverland and that Peter and the boys got to fight Captain Hook.” Darla arrives in Neverland that night and Peter immediately sees her as “a regular Wendy” —as all women are interchangeable to him, in fact he refers to all the women he comes in contact with as “The Wendys.” As celebrations continue with Peter and the Lost Boys, the girls would obediently stand behind the boys “like banquet waitresses.” When Darla cannot stand being called a ‘regular Wendy’ she asks the girls why Peter refuses to call them by their actual individual names, to which the girls respond:

The injustices present in Neverland and children’s literature are highlighted by Yolen in this story as she pinpoints examples in narratives that follow us and we enjoy without questioning. Yes, Peter Pan is about adventure and fun but who gets to have most of it, and who ends up hurt in the end as she must put up with his moods, flaws, and inability to adapt to circumstances? Innocence and living in the moment as ‘fun’ children do results in selfish behavior and unbearable cruelty to others.

This story is just an example of the kind of excellent work that Yolen accomplishes by creating alternative possibilities in this collection of retellings. Such attention to detail is present in all the stories in The Emerald Circus and it is a collection I would recommend to everyone.